// Erik GeurtsErik Geurts is the founder and owner of ErikGeurts.com BV, a company in The Netherlands specializing in the development of internet projects. Starting in 2016, the company is also investing in sustainable energy and transportation initiatives.

After investing in a small chunk of a large solar farm in 2018, and a company that builds and operates charging stations for electric vehicles in 2017, we recently took some further steps to make our company more sustainable. We replaced the internal combustion engine car with a full electric vehicle, and installed an array of solar panels on the building. 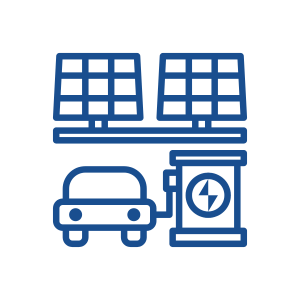 Our company offices are located in a part of the building we also live in. When we bought the property 3 years ago, a building that dates back to 1920, we had it renovated to modern day standards with regard to isolation and energy efficiency. That meant investing in high performance double pane glazing, and floor and roof insulation. We also had low temperature underfloor heating fitted in most of the building. The part of the building that we use as offices has its own heating and smart thermostat, meaning we don’t heat it outside of working hours.

Fortunately, we’re in a moderate climate, so there is no need for air conditioning. It does get warm outside in summer here, and we do get the occasional heatwave, but so far the house has proven to remain remarkably comfortable in all seasons. Being just a few meters away from a nice stretch of forest does help, the area is significantly cooler than a more built-up area like a village or a city. And in winter, it takes relatively little energy to heat the building and keep it warm and cozy.

All of the lights in the house and the office are LEDs, which makes them extremely efficient. We also installed several very energy efficient appliances. The outcome is that the base electricity load of the entire building is just about 150 watts on average. Just think that in the past, that would be about 2 light bulbs, now it is enough to power an entire house and office. There are occasional spikes, for example when running the dishwasher, the oven, or the washing machine.

Next steps in sustainability

This year, we were able to make the switch from driving a car with an internal combustion engine (ICE) to a fully electric vehicle (EV). While it is true that EVs are more expensive to purchase than traditional cars, their running costs are significantly lower than ICE cars. It does help – of course – that there are several tax incentives and benefits for businesses buying full EVs.

And on top of that, it is a nice bonus that the EV is a lot of fun to drive, with the immediate power available from the electric motor, the incredible quietness, and all of the gadgets, bells and whistles that EVs come with nowadays.

But the biggest benefit is that EVs have very low maintenance costs and are extremely cheap to drive. Electricity is a lot less expensive than petrol, especially if the car can be “plugged directly into the sun”.

We also had an array of photovoltaic (PV) panels installed on the roof of the house. Under perfect conditions, the array is capable of producing 4 kW of electricity, but that will of course be less most of the time. However, it turns out that even with minimal light, they already produce more than enough electricity to power the entire house and office. As a matter of fact, during daylight they usually generate at least double the energy needed to run the entire building for a full 24 hour period. Surplus energy during the day is exported to the grid or used to charge the car (more on that below).

In our country, there is still a system of net metering. That means that at the moment we get the same rate for a kWh of electricity exported to the grid that we pay for a kWh of electricity imported from the grid. As such, the grid is effectively our battery. However, this regime is going to change starting 2022, the kWh-price for exported energy will gradually be decreased over a period of several years. When that happens, it starts to make sense to also invest in a storage battery, so that surplus energy generated from the PV during the day can be stored in the battery for use later in the day and during the night.

In a way, there is already a battery present, a rather large one in fact. The EV is essentially a huge battery with a touch screen, a steering wheel, and 4 wheels. For that reason, the EV charger we selected to have installed comes with a smart ‘Eco +’ mode. This means that it constantly monitors the PV generation, the electricity consumption of the house and office, and the electricity being exported or imported to and from the grid at any time. As soon as the surplus electricity being generated is sufficient to charge the EV, the charger automatically switches on and starts charging up the car battery. If the sun is covered by a cloud, or if the house consumes a bit more electricity temporarily, the charger automatically pauses, resuming as soon as surplus electricity is available again. It really feels like the car is directly plugged into the sun.

From time to time we’ll need to charge the car more quickly than what can be drawn from the solar panels. For that reason, the charge point also has a fast mode, which gives the car the full 11 kW it can handle, drawing from the 3 phase connection we have in the house. That way it’s fully charged in a matter of hours, ready for a longer drive. This also addresses the frequently asked question: “how long does it take to charge the car?”. The answer is: “30 seconds to plug it in, and 30 seconds to unplug it. Almost exactly like a phone.”

In the future, as outlined above, the plan is to have a home battery installed, enabling optimal use of surplus electricity generated by the solar array, at times when the car is already fully charged or when the PV doesn’t generate enough surplus electricity to charge it. The objective is to effectively have the house and office electricity neutral. The solar PV will never be enough to power both the house and charging the car, so we’ll always be drawing some power from the grid.

Once it’s time to start considering replacing the heating system, it will most likely be a heat pump, which runs on electricity as well. We may decide to have some more PV installed at that time to compensate for the extra electricity consumed by the heat pump.